This is Antoine. The only moustache in the office.

The fact that he has managed to find a niche in a team exclusively made up of women is proof that he has been good at cultivating the better side of his nature. By that we mean his feminine side…

Antoine grew up in the 80s. He enjoys Dragon Ball Z and Ovaltine, and is unrivalled when it comes to dancing the Mia*… And his dog's name is Marty, as in Marty McFly, from Back to the Future, which just goes to show how much the 80s still affect his daily life!

Antoine also has a passion for all things ending in "o". Video games, electro music and pizza mucho!

This authentic gone de Lyon* and former journalist now writes for Monsieur Simon, a website designed as a toolbox for modern parents who are both concerned and curious. Parents like him, because Antoine is also the father of two beautiful children (we're totally objective, obviously). And when Antoine toils back up the hill to his home, he breaks into a wide smile and whips on his Super Doting Dad's outfit, for the great delight of his 2 Padawans.

(*kid born and raised in Lyon)

More tips and reviews by Antoine

People who think, perhaps wrongly, that Lyon’s fine-food scene is a little overblown and stuck in its ways can relax: the next generation is breaking...

Internationally renowned for its impressive, demanding programme of music, the Lyon Opera is exploring new ground in a far less classical direction,... 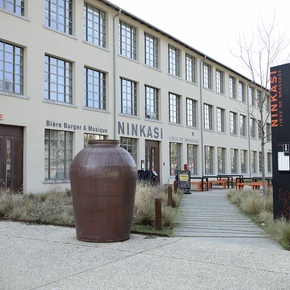 Visit to a traditional craft brewery. A one-hour tour including a presentation of the company and a chance to discover the raw materials, production...

In partnership with Stéphanie Iguna of the Food Factory, C'est Lyon qui Régale revisits the great classics of Lyonnais gastronomy. Today, it’s the...

With a busy and varied network of associations, lively activists, loads of venues, and an inclusive, straight friendly attitude to having fun, it’s...

In partnership with Stéphanie Iguna of the Food Factory, C'est Lyon qui Régale revisits the great classics of Lyonnais gastronomy. Today, we bring a...

A Lyon, c'est l'mâchon - Munch on a traditional mâchon in Lyon!

A novel experience for those who tend to skip breakfast, and a firm favourite among gourmets, a mâchon is Lyon's equivalent to a good English...

Lyon reveals its scary side

Sure, it’s world-famous. It’s smart. It’s welcoming. But Lyon can also be unnerving. Thrill-seekers and lovers of esotericism and other oddities can...

On the 27th and 28th of April 2019, beer lovers will flock to La Sucrière for the Lyon Bière Festival.

From 5 to 28 March 2020, the Spraying Board exhibition is highlighting two practices that have long been marginalised: skateboarding and street art.

From the 9th to the 16th of February, the most French of English film festivals is de retour with its 25th edition, packed with brand new releases,...

After-work events at the Auditorium

Cheeses of Lyon and the surrounding region

Arguably the most important part of a French meal, cheese is a source of national pride. The average person in France consumes 26 kilograms of cheese...

On Sunday 19 January 2020, this great athletic challenge will be held for the 40th time. Water below 10°C. Flippers. Sport. Exhilaration.

Where can I watch sport in Lyon?

Participating is another story (Hello New Year’s resolutions). While waiting to don your tracksuit, let’s explore a number of large facilities in the...

On 5th January 2020, the kings and queens will be crowned! An ancient tradition that the team at C’estLyonquirégale takes extremely seriously. And as...