Paul Bocuse passed away on Saturday the 20th January 2018. As people of Lyon, we pay tribute and express all of our appreciation to this great Chef, who worked so hard to promote his city, Lyon, and Grande Cuisine.

Described as “Chef of the Century” and the “Pope of Gastronomy” (1989, Gault et Millau), as well as “Lyon’s number one ambassador” (Georges Képénékian, Mayor of Lyon), Paul Bocuse held the title Meilleur Ouvrier de France since 1961 and was unanimously praised by his peers for his exceptional skills as a chef, his pioneering approach and hard-working attitude, along with his generosity, simplicity and conviviality.

His cuisine, which was both classic and innovative, placed the quality and flavour of ingredients above all else.

One of the only chefs to have retained his three stars in the Michelin Guide for more than fifty years, the man who was affectionately known among other chefs as “Monsieur Paul” also created the Bocuse d’Or competition (every two years since 1987), an international culinary and hospitality school and several restaurants across the globe.

It is a colorful house on the riverbanks. Or almost.
On top, in front of the chimney, ten capital letters: PAUL BOCUSE.

The name of the Auberge du Pont’s owner, where the world’s most emblematic chef has been practicing his talent for nearly 60 years, including half a century awarded with three Michelin stars, a reference (if there was any) on the gourmet scale.

“The River Man“, as he calls himself in allusion to the Saône, which punctuacted his life, is happy. And he never considered relocating, but rather made Lyon synonymous with love for food, “this city that is near Bocuse“, as once wrote Gustav Heinemann, former President of the Federal Republic of Germany.
In a game of questions and answers, the chef returns the ball to our court. Firmly.

Have you never been tempted to go elsewhere, to find out if it wasn’t better?

I was born in 1926 in Collonges-au-Mont d’Or, I have a country house, I sleep in the same room where I was born, head north and Saône left. I wasn’t a stellar student but I did attend middle school. But, mornings and evenings, I was always drawn to this river. We owe it a lot and at a time it largely fed us when I went fishing for pike or carp (Pause).
I am the river man. We knew how to set traps, we went swimming and sometimes even went searching for people who had drowned...
I found that much more interesting than school and afterwards I learned geography by traveling.

Speaking of travels... have you never been tempted to stay in Japan or in the United States?

Lyon has always had a strong culinary tradition and talented chefs. I have said before that Lyon is a city that makes you hungry and its privileged location allows for working with the best ingredients and for drinking the best wines. So no, I was never tempted.
I started cooking during the war, then I got engaged, I was discharged, I worked at the Col de la Luère, at La Mère Brazier, and in Vienne with Fernand Point who sent me to Paris to work with Lucas-Carton. I worked for several seasons in Megève and then, in the fifties, I returned to my father. For good.

You know, my grandfather sold the franchise and the name with it, so my father could never give that name to his business. So when I was able to get it back, I put it on the rooftop.

People don’t know what it means to lose a name…

And you gradually ascended to starred heights!

My father and I received our first star in 1958. I think it was Louis Rouchy, the owner of Brasserie Le Nord who sent the Michelin Guide our way. But we didn’t celebrate it that much. At the time, there wasn’t so much hype around the stars.
In 1960, for the second star, my friend from Roanne, Jean Troisgros, alerted me to it. At the time, the Guides were sent in advance to tire dealers and one of them had told him.
Already, at the time, I had been visiting Michelin, where we were welcomed by a secretary.
They always talked about the need for a high-quality welcome.

So did you start thinking about the ultimate accolade? About that third star, which Eugénie Brazier and Fernand Point had been awarded?

(Pause) It seemed very far away to me. But I also told myself, after the second, why not a third? And it happened in 1965 when I was the 11th at that level and the youngest postwar recipient (39, ed). This had a big impact and everyone was talking about Lyon, since there had been a seven or eight page spread in Paris Match. Thereafter, I can say that I wasn’t necessarily afraid of losing a star, but the release of the Guide always remained a special moment for us...

It is true that a few years later, with other chefs also owning their own restaurants we launched the Great French Cuisine movement, which became Nouvelle Cuisine at the initiative of Gault and Millau. Gradually, I think it allowed chefs to take pride in their work. (Pensive) I took the chefs out of the kitchen but now it would be good if they went back there…
Lyon has always been highly rated by the Michelin Guide. If you think of that in 1936, there were 35 stars for about 20 restaurants.

It was at that time that Curnonsky, the “Prince of gastronomes“ crowned Lyon as “gastronomic capital of the world“. Thirty years later, in 1966, there were 26 stars for 17 restaurants. And I think that after Paris, Lyon is still the city with the most stars in France.
I liked being its ambassador and I went to Japan and the United States with my chef friends. And we were able to bring people to Lyon by organizing SIRHA, with its Bocuse d’Or competition, where many countries are represented, some even call it the Nobel Prize for Cuisine. I could not imagine it happening anywhere else but in Lyon.

It is a great success, right?

Of course. But when you think about succeeding, it is sometimes what we have missed.
The greatest success is being healthy. I do not get intoxicated. I think we need to stay grounded. The tap is running but may stop tomorrow(sic). My cooking style has stayed the same. I sometimes hear “Bocuse is tacky“.
They’re right; Bocuse is tacky with 2,200 meals served each day in Lyon. If we weren’t tacky, there would be nothing left for the others (laughs).

I have always advocated for an identifiable cuisine, with bones, served on normal plates.
Had we wanted to do something else, we could have. But here, no syringe, no siphon.

We don’t do virtual cuisine. The important thing remains the quality of the product and the transmission of our business. It is a bit like music. After Beethoven, there haven’t been many great composers, but once you’re no longer there, people do as they please. You need to work as if you’re going to die in a hundred years and live as if you’re going to die tomorrow. Life is a joke and we shouldn’t take ourselves too seriously because ultimately life is too short.

Bad year, good year, globally, approximately ten thousand people a day eat a Bocuse meal. Or, more than three and a half million people a year. The population of Berlin or one-and-a-half times that of Paris.

In gourmet language, the TGV leaving Paris Gare de Lyon at 9:58 am is called the «TGV Bocuse» because it allows you to be seated at your table at 12:30 pm! 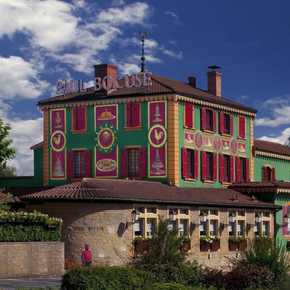 Located alongside the banks of the Saône, the Brasserie de L'Ouest has a large wooden terrace with an attractive view across the river. The interior...

Le Nord was the first brasserie created by Paul Bocuse. Just a stone's throw from the Town Hall and the Opera House, it offers diners a fresh take on...

The Brasserie Le Sud, one of the five brasseries created by Paul Bocuse, proposes a bright, sunny cuisine with a Mediterranean touch, just a stone's...

Marguerite is an exceptional restaurant housed in a building with a rich history!

Housed in the former Gare des Brotteaux, in the heart of Lyon the city's prestigious district, the Brasserie de L'Est will whisk you away on a...

The Bocuse restaurant ‘Fond Rose’ welcomes guests on the banks of the Saône in Caluire, nestled in the heart of a park with hundred-year-old trees....