Of the two hills in Lyon, the second often surprises visitors due to its unusual layout, with its buildings seeming to ascend the hillside in tiered formation.

Ever since the 19th century, the Croix-Rousse district has been known as "the hill that works", while the Fourvière district, was baptised "the hill that prays". The Croix-Rousse was formerly the neighbourhood of Lyon's silk manufacturers, and during the 19th century it reverberated with the sounds of the "bistanclaques", an onomatopoeic name given to the weaving looms by the inhabitants of the city.

With 30,000 canuts (name given to the silk workers in Lyon) the district was a hive of activity, and the city itself a major hub for textiles in Europe. Modern-day visitors are invited to stroll through the area to discover its true essence and the many buildings specially built to house the weaving looms, amid a maze of traboules and stairwells. To this day, the slopes have maintained a real neighbourhood spirit, sheltering a village lifestyle that makes the inhabitants of the Croix-Rousse very proud of their district.

Here, past and present cohabit on a daily basis, with traditional silk workshops that are open to visitors, and the boutiques of young designers keeping the spirit of the canuts alive. In fact, Hermès still continues to produce its legendary silk squares close to Lyon! 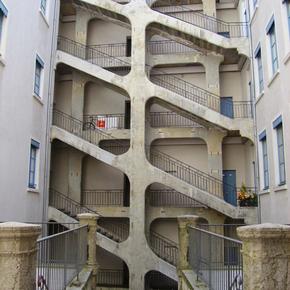 An essential and impressive traboule, location of many movies

This 10.3 hectare garden is a landscaped park consisting of 3 terraces that hug the slope, including rare species such as maclura pomifera (osage... 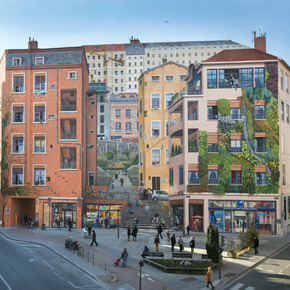 This 1,200 m² trompe-l’oeil painted wall shows the atmosphere and life of the quarter, typical of the Croix-Rousse plateau, its houses and stairs,...