Visit the Forts of Lyon and the Surrounding Area

At the end of the 19th century, Greater Lyon had 33 forts, both in Lyon and the surrounding area. Though not all of them are still visible, some are open to the public for an experience that’s out of the ordinary!

Before the 19th century, Lyon had few fortifications and strongholds and the ones it had were badly maintained, which led to the city being occupied by Austrian troops in 1814 and 1815.

At this unstable time, there was an urgent need to make Lyon a stronghold for the French Empire, in order to defend the south-eastern part of the country.

It wasn’t until the period from 1831 to 1854 that 19 forts were built in Lyon and its immediate surroundings: Montessuy, Caluire, Brotteaux, Montluc, La Motte, La Part-Dieu, La Vitriolerie, Ste-Foy, La Duchère, St Irénée, Loyasse and Vaise.
After the war of 1870, General Séré de Rivières came up with ideas to rework France's defence systems and wanted to set up a second ring of defences further out from Lyon, known as the second belt, to compensate for the increase in artillery range and the growth of the city.

Some of Lyon’s forts were therefore destroyed (the one in Les Brotteaux to build the old railway station, the one in Part-Dieu to build the shopping centre, etc.) and others were repurposed.

Today, some of these forts are open to the public, so we recommend you see them for yourself.

Built to guard the North entrance to Lyon, above a bend in the river Saône, the Fort de Vaise was part of the city’s first ring of defences in the 1830s.
Connected to the Fort de Loyasse by underground passages, it quickly became obsolete and was bought by Lyon city council in 1927. It was abandoned in 1965 and saved from demolition by the Renaud brothers, who restored it and set up a heritage conservation and cultural foundation there, which still hosts exhibitions and events today.
The underground passages were cleared and opened up for guided tours by the association OCRA-Lyon in 2006.

Fort Saint-Irénée, built between 1834 and 1842, was part of Lyon’s first belt of fortifications. Made of yellow Couzon stone, it incorporates five arches of the Gier Roman aqueduct and the start of a siphon to get the water across a dip in the land, the Dépression de Trion.
At the time, it was made up of a pentagonal fort and a fortified barracks and was intended as the command post for the west sector of Lyon. By the 1960s, it was already outdated and was used mainly as an infantry barracks.
It was handed over to the university after the First World War, and from 1921 to 1951, it housed the Institut Franco-Chinois, the first Chinese university outside of China. Today, a cultural centre traces its unusual history. In 1955, the André-Allix university residence was set up there.
Now you can see the fort from the outside, where the arches of the aqueduct are visible, and go inside the building’s courtyard to visit the Nouvel Institut Franco-Chinois.

The Fort de Bron, as part of the city’s second belt of defences, was built between 1875 and 1877.
It could house 841 people and 64 cannons in wartime.
In 1886, progress in artillery and the invention of a new type of explosive rendered the fort obsolete.
Partially disarmed, it remained a major storage site. A military aviation school was set up nearby in 1912, with the fort housing the pupils.
It was occupied in 1942 by the German occupying forces and became French again in September 1944.
Decommissioned from military use in 1963, it was acquired by Greater Lyon council, then Bron council in 1981.

Built between 1875 and 1877, the Fort de Feyzin was mostly used as a garrison for the army then the National Gendarmerie.
Closed and forbidden to the public in the 20th century, it was acquired by Feyzin town council in 2003, who restored the 22,500m2 space.
The fort, in a wood with a botanical trail, is one of the best examples of the ‘Séré de Rivières’ style: there is a single entrance accessed via a drawbridge over a ditch, with a pentagonal structure open onto the city to be defended.

Free guided tours are offered on the second Saturday of every month for visitors to (re)discover the areas of the Fort that are usually closed to the public. To register for one of these tours, open to anyone aged 5 and up, email [email protected] For more information, visit the Fort de Feyzin website (in French).

The Fort du Bruissin, completed in 1881 (as the inscription over the entrance says), was built to house 33 cannons and around 300 men.
It has wooded grounds and is surrounded by imposing ditches.
Used as an ammunition depot in the First World War, it was then occupied by German troops at the end of the Second World War.
In 1979, it was acquired by Francheville council, who undertook considerable renovation works to enhance this exceptional historical site.
The Fort is now a centre for visual and performing arts.

The Fort du Paillet, built between 1883 and 1886, immerses visitors in military history thanks to its excellent level of conservation.
It has a layout typical of the forts built in the region at this time and could last three months without supplies from the outside. As well as the military equipment, you can see everything that made up the daily life of the garrison: kitchen, bakery, water cistern, well, etc.
Used as a storage depot during the First World War, it would go on to be occupied by the Germans in 1942 and was used to hold prisoners before they were sent to other camps.
It was bought by Dardilly council in 1981 and is now home to various associations.

Forts Open for the European Heritage Days Only

There are some exclusive opportunities open to you on the third weekend of September.
For the EHDs, the majority of the forts offer guided tours. It’s also an opportunity to see forts that are usually closed to the public!

This fort, covered in vegetation, was part of Lyon’s second belt of defences and covers an area of 16,200m2. Today it is home to Parc Vanciaventure, with a treetop adventure course, a commando assault course over the fort’s old obstacles and a terrifying escape game inside the halls of the fort.
Visit during the EHDs for traditional guided tours of the site.

Built around 1888, the Fort de Saint-Priest was intended to watch over the Plaine de l’Isère, the road to Grenoble and the ‘Lyon Bourgoin’ railway.
Decommissioned from military use in 1900, it was used a depot before being occupied during the Second World War. The German army exploded some of the munitions that they couldn’t take with them in 1944, damaging the fort.
It was bought by the city council in 1969 and the public can see it during the EHDs or contact the association La San-Priode to arrange a visit.

Eléonore is the romantic member of the team! Rumour has it that she knows her classics better than anyone else, and if you want to strike up a conversation with her, just mention Jane Austen, and you'll be away! 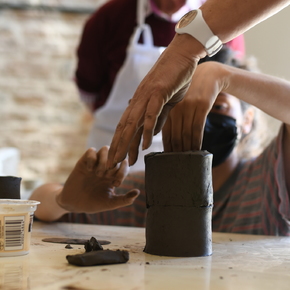 The fort was built between 1830 and 1834. The building, made from Couzon stone, includes an entrance with an observation bunker from 1847, prison...

Completed in 1878, covered with vegetation, principally ash trees, at the request of its builder, it is practically invisible even though it is...

The fort is one of the biggest built by Séré de Rivières at the end of the 19th century. It is the link between the fortified Vauban forts and the...

The fort site still shows signs of its successive occupations; firstly, in Gallo-Roman times, the start point of the Gier aqueduct and the Trion... 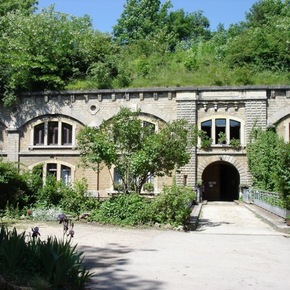 Built between 1883 and 1886 as part of a network of defences surrounding Lyon introduced after the 1870 war by General Serres de Rivière, from... 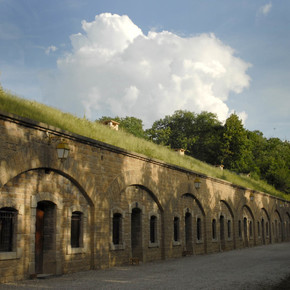 Built in the 1870s, the Fort de Bron is one of the most interesting and best-restored of the forts surrounding Lyon. A key part of the city’s... 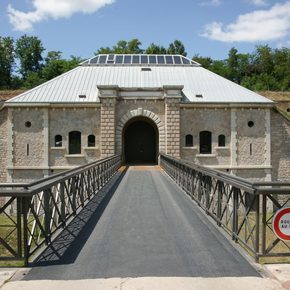 Located at the highest point in Francheville, the fort is nestled in the heart of a 10 hectares wooded site. It was built from 1878 to 1881 and is...