Lyon: Where to go dancing for the New Year?

It's not every day that we step into a new decade. Might as well celebrate it in style! Here is a selection of electrifying events to jump into 2020.

Self-proclaimed the best New Year's Eve in Lyon, Ninkasi Gerland's party is a guaranteed blast. Straight from the cosmos itself, especially this year, the team organising the event promise a transition to 2020 that pays tribute to man's first steps on the Moon, the release of Stanley Kubrick’s film masterpiece and the official opening of NASA's tourism branch.

There’s no shortage of good reasons to reach for the stars! For the occasion, the whole venue is involved: the Kao welcomes, on the turntables, Jack is Back, Minorah and Crowd Control for an all-night intergalactic techno/house set. At Kafé, DJs Waxmine and Andria will be spinning their grooves. Klub will host Vinzzo's hypnotic visual and sound installation. And outside, a tent will be set up for a cosmic bass performance with DJ Ross.

From 10:30 pm to dawn at Ninkasi Gerland.
Dinner + evening package from 8 pm (75€ + booking fee).
Further information on the www.ninkasi.fr

If you prefer a cosy, intimate New Year's Eve party, surrounded by tranquil music, Fcknye Festival 2019 is definitely not for you. The organizers of the event are dreaming big. To accommodate all this excess, the Eurexpo site was acquired: both techno and hip-hop will be in abundance!

As for urban music, we await the newbies 47TER, Koba Lad and Zola. Royalty on the scene, Vald and Orelsan, will be headlining. Techno is not forgotten with the furiously energetic DJ AZF, the duo Mind Against, and the sensational Vladimir Cauchemar.
There will also be a bunch of fantastic newcomers, making for a very promising event.

To maintain your energy (you will need plenty), several food stands are planned to last until sunrise.

From 7 pm to 5 am at Eurexpo, Chassieu.
Tickets: €56,87 or €87,92.
Facebook event
Further information on www.fcknyefestival.com

This is New House Year

The great club of Lyon’s 7th arrondissement invites local DJs to the turntables in Room 1, the spearheads of this movement: Naux (former jazz drummer), the brothers Frr Fonk and the neo-parisian Strato. In Room 2, Terror Mike will get the crowd bumping with an old school r'n'b and rap set. All good reasons for jumping into 2020 in an atmosphere of harmony and joy. How can you not love this?

From midnight to 7 am at Le Petit Salon
Tickets: €16/19.
Facebook event

New! Metros and funiculars will run all night on December 31. More information on the TCL website.

This is Antoine. The only moustache in the office.The fact that he has managed to find a niche in a team exclusively made up of women is proof that he has been good at cultivating the better side of his nature. By that we mean his feminine side… 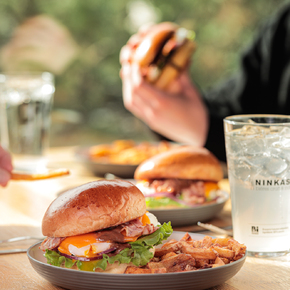 Ninkasi is a venue that mixes beer, burgers and music. Craft beers, burgers made from fresh, locally sourced ingredients and a programme of concerts...

Just a short walk from Jean Macé is Le Petit Salon. Contrary to what its name might suggest (and by now you’re sure to know that ‘petit’ means...